Paris Hilton ordered back to jail

‘She was taken handcuffed and crying from her home. She was escorted into court disheveled, without makeup, hair askew and face red with tears.

Crying out for her mother when she was ordered back to jail, Paris Hilton’s cool, glamorous image evaporated Friday as she gave the impression of a little girl lost in a merciless legal system.

“It’s not right!” shouted the weeping Hilton. “Mom!” she called out to Kathy Hilton, who also was in tears.

The 26-year-old hotel heiress tried to move toward her parents but was firmly steered away by two sheriff’s deputies, who held her by each arm and hustled her from the courtroom. [..]

The sheriff later hinted at a news conference that Hilton had psychological problems, and said she would be watched in jail “so that there isn’t anything that is harmfully done to herself by herself.”‘

Followup to Paris Hilton ordered to return to court. 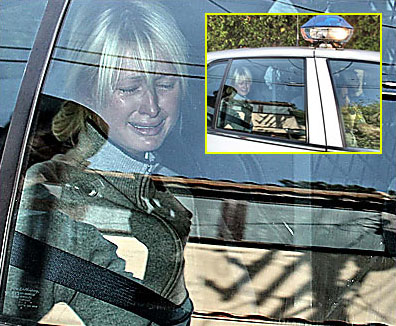 This entry was posted on Saturday, June 9th, 2007 at 2:18 pm and is tagged as: crime, images, unlucky. You can follow any responses to this entry through the RSS 2.0 feed. You can leave a response, or trackback from your own site.