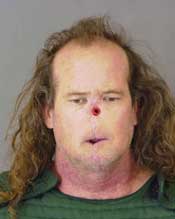 ‘Three men have been charged with kidnapping and assault in a case worthy of a cult movie plot.

A 48-year-old Lake Elsinore woman has accused the three of abducting, beating and dumping her in Mexico late last month.

The accused are the 45-year-old man the woman had been living with and two of his friends, said Detective Joe Greco of the Lake Elsinore Police Department. Greco said one of the men is nicknamed “No Nose” because his face is disfigured from a gunshot wound suffered years ago.’

This entry was posted on Thursday, September 20th, 2007 at 3:25 pm and is tagged as: crime, images, strange. You can follow any responses to this entry through the RSS 2.0 feed. You can leave a response, or trackback from your own site.